/ Work and Class Suspensions in NCR for APEC

Work and Class Suspensions in NCR for APEC

Posted on October 24, 2015 in Announcements by Batasan Hills Admin

Given the Asia-Pacific Economic Cooperation – Economic Leaders’ Meeting, which will be hosted in Metro Manila on November 18 and 19, 2015, the Philippine government has suspended work and class in the National Capital Region (NCR) on the following dates: 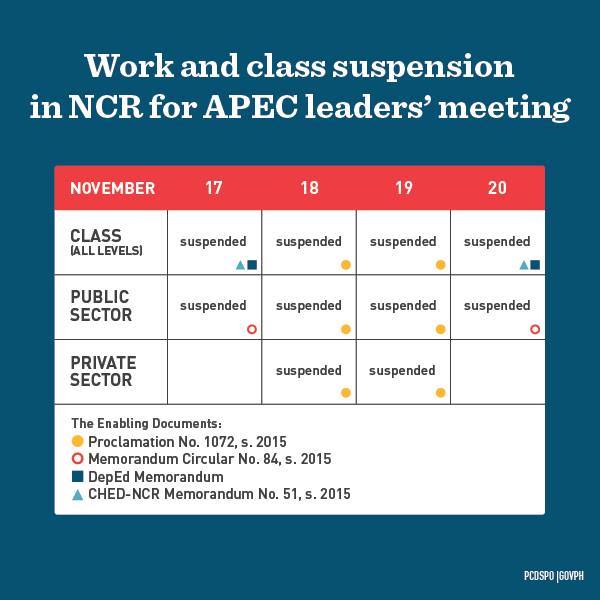 For the public sector, work is suspended from November 17 to 20. Despite the suspension, frontline and basic services provided by the government will continue operating.

For the private sector, work is suspended on November 18 and 19.

The Department of Education (DepEd) and the Commission on Higher Education (CHEd) have both declared that classes are suspended from November 17 to 20 for all levels.

The work and class suspension is expected to ease traffic in Metro Manila and accommodate the safety of the visiting leaders of the 21 partner economies of the Asia-Pacific Economic Cooperation.

Source: Official Gazette of the Republic of the Philippines